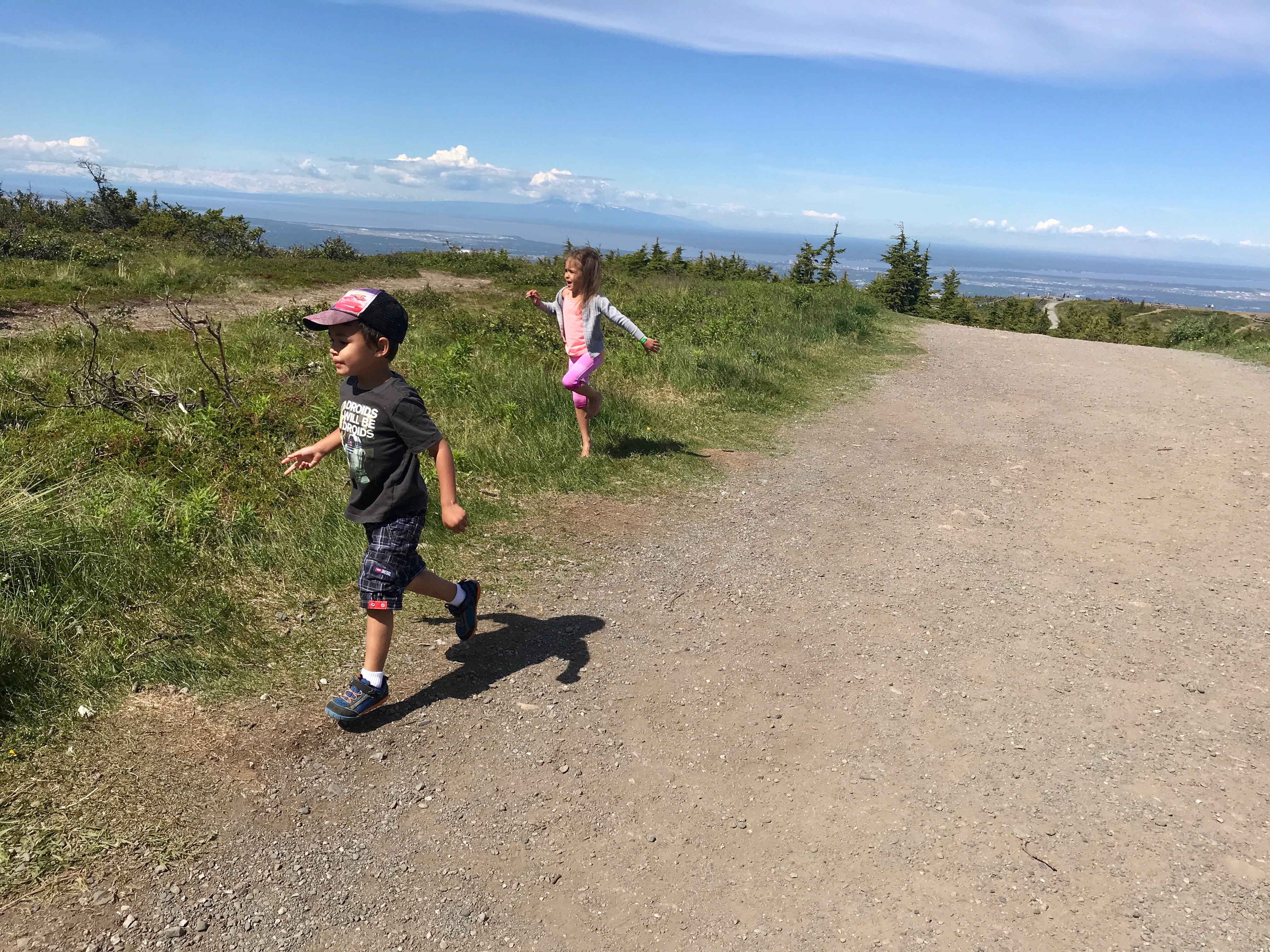 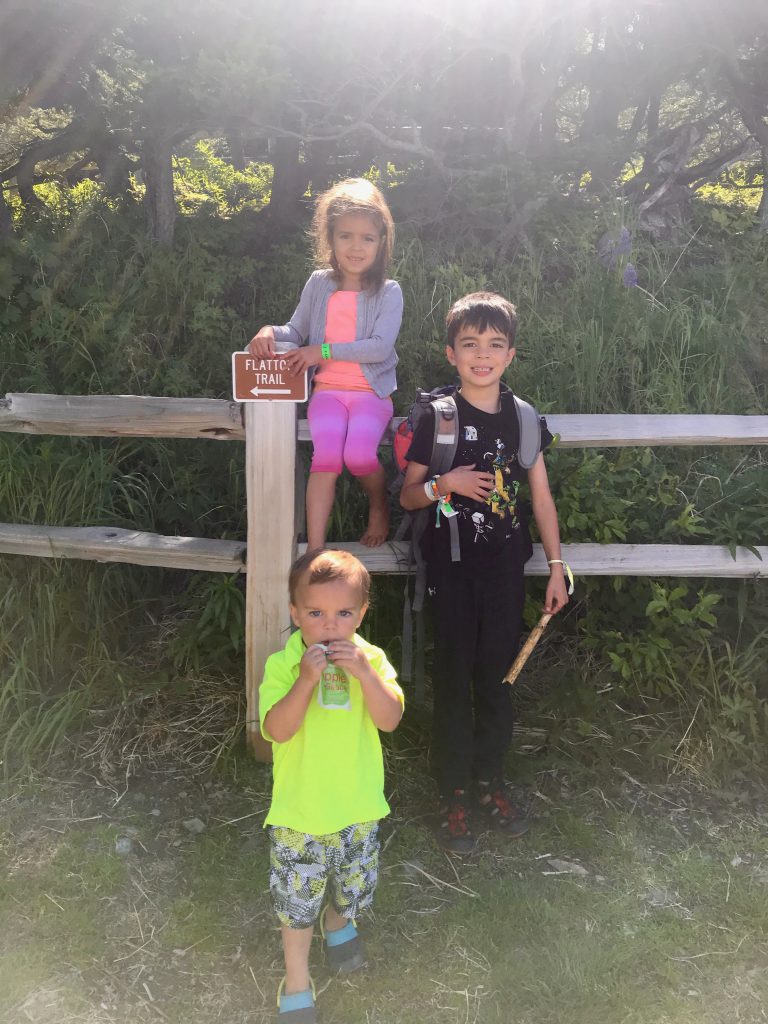 The weather has been gorgeous outside! In the summer, my general rule of thumb is if it’s a nice day, we get out and play! I recently got my Alaska Park Parking Pass and wanted to get some use out of it. We decided to head up to Blueberry Loop for a picnic lunch and then a hike.

Although we’ve done this hike many times before, this time it turned out to be one of those worst-hikes-ever for me. When we arrived at the trail about 45 minutes later than we intended to, my darling 5 year old Kaiya announced, “I forgot my shoes”. I was not quick to anger because this happens all. the. time. I don’t know if this is a thing for most kids, but it is definitely a thing for my kids. And never do they realize until we are there – at the place we were supposed to be 15 minutes ago. So I cheerfully told her it was ok, she would just have to hike barefoot. Although uncomfortable I knew she wouldn’t be the first child to was barefoot for an extended period of time.

Next, I gathered all of our stuff including my backpack that held our picnic blanket, food, and water. I didn’t grab my Ergo carrier because Stuart loves to run now and I figured with having a backpack I would end up carrying him in the front anyway. We headed up the steep incline towards our picnic place at the base of the loop. 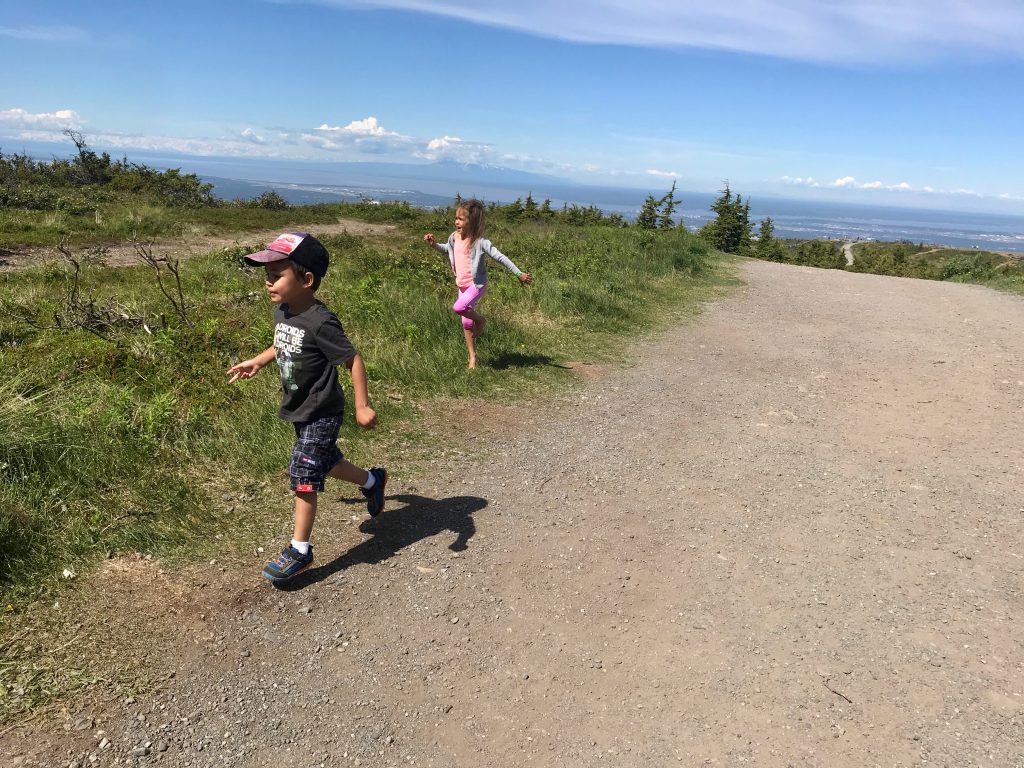 We ate our picnic with our friends and all was well! The kids were having a good time eating green crow berries. We decided to get hiking and I left my backpack at our picnic area. As we moved up the first part of the trail. (We went south.) It opens up to beautiful expansive views of the city, the inlet, and beyond. The only problem I realized as we made out way up is that most of blueberry loop has a large cliff on one side of the trail. It’s a no-big-deal kind of cliff for my four year old, but a deadly cliff for my two year old who toddles and seemed to be falling down about once per minute.

This is the hard part about being a mom, I have hiked this trail more times than I can count. I have hiked it with each of my children, I have hiked it will all of my children at the same time, and now, this time it’s different and dangerous in a way I wasn’t expecting. Had the trail suddenly changed? Not much, but my circumstances had. For the first time I have a super adventurous toddler that always runs at full speed. He is not cautious in the least bit and he get a head injury at least once a day. So all of the sudden this cliff puts a big damper on things because I realize we are on a mountain, and the cliff pretty much goes all the way around it, I realize I don’t trust him to be within four feet of it (basically on the trail at all) incase he falls and rolls, and I realize he feels quite strongly he does not want to be held and is kicking and screaming to get out of my arms. Here is the moment that happened: 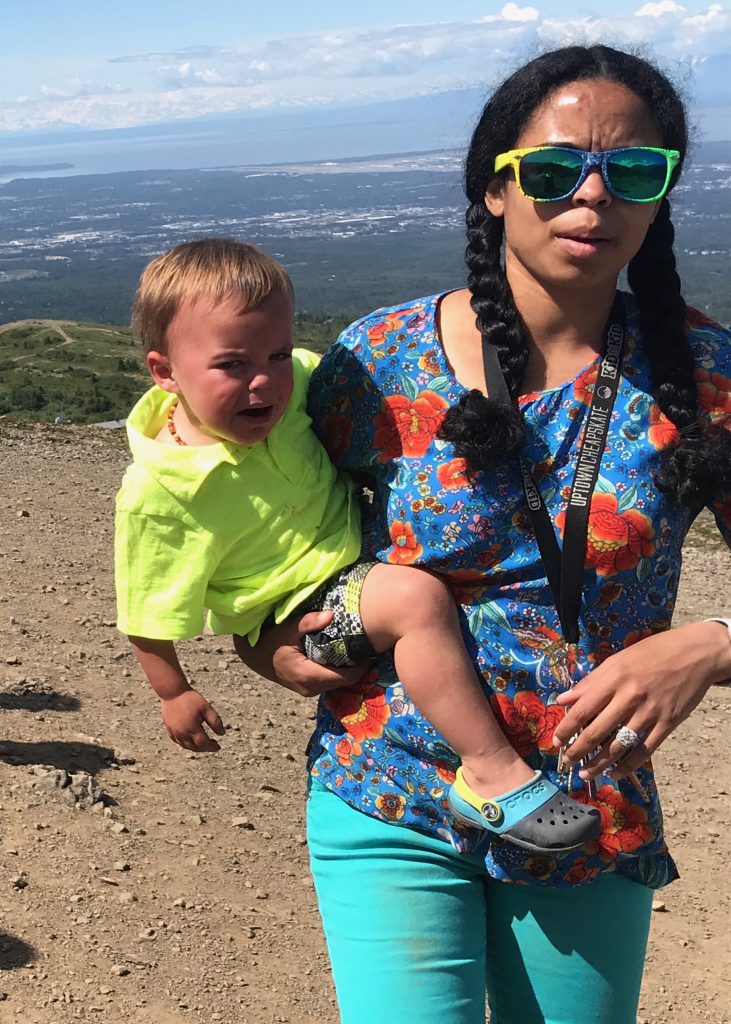 And the ensuing tantrum: 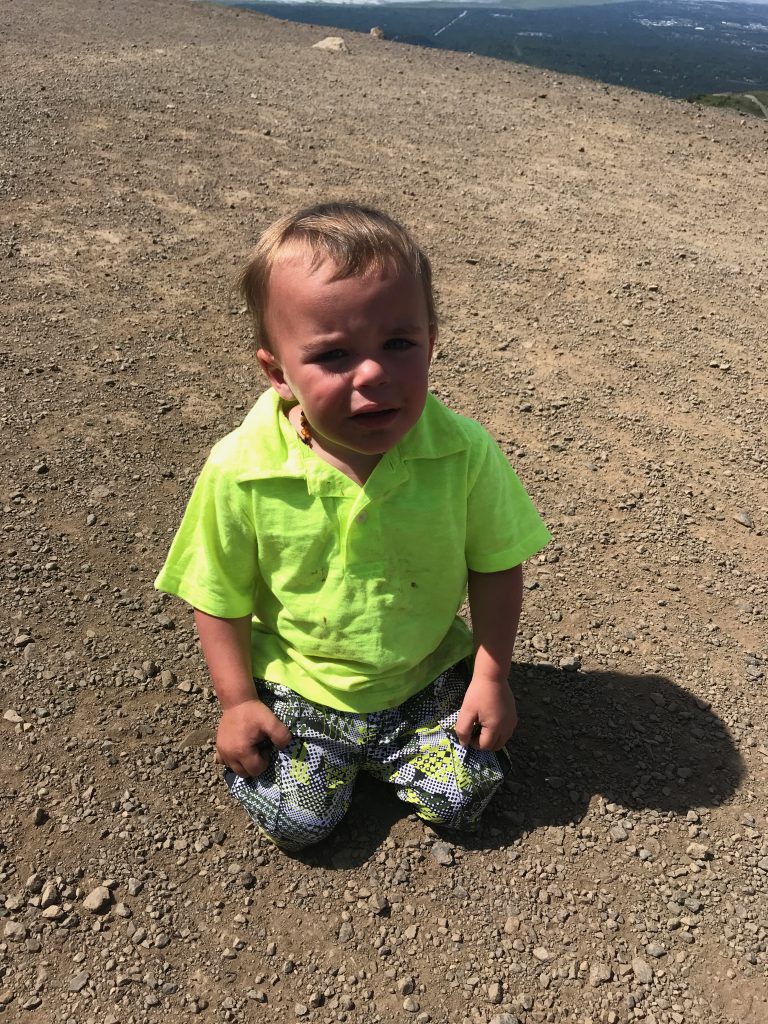 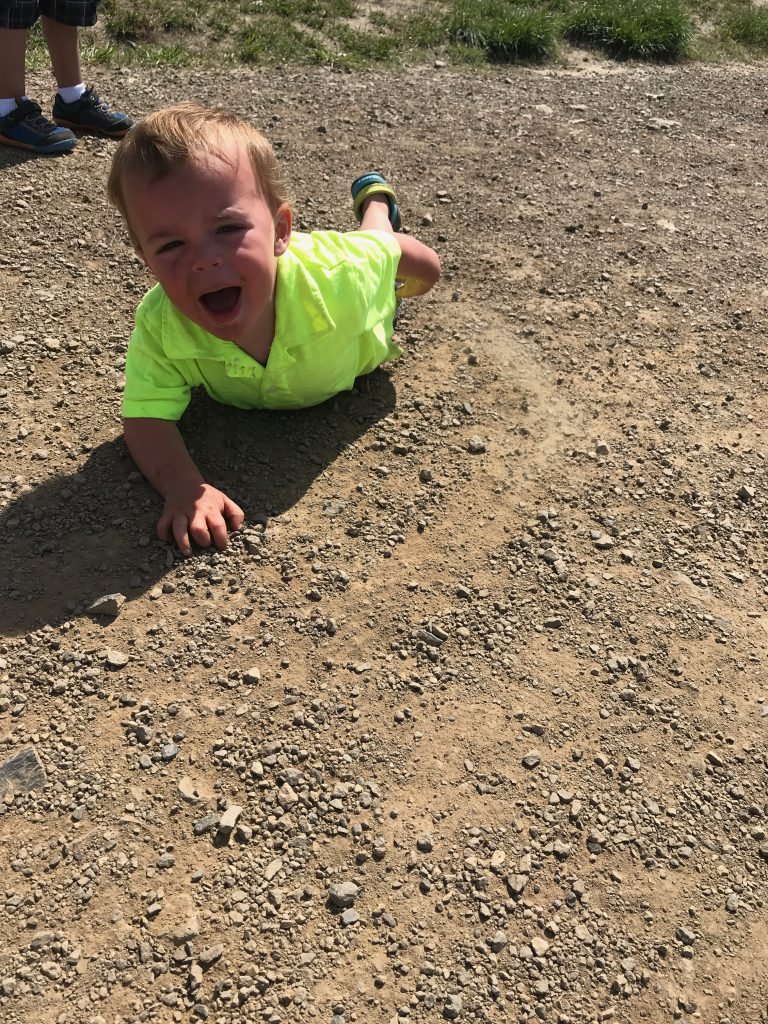 When he was done I scooped him up and carried him until we got to the next place that didn’t have a steep cliff. After just finishing with Stuart’s highly frustrating moment, feeling particularly worn out. I recall yelling at Thomas. “Why are you, my oldest child throwing rocks down the trail towards people? In the past five minutes you have heard me tell Chase not to throw rocks down the trail, you have heard me tell Stuart not to throw rocks down the trail, and now you? Come on Thomas, I expect more from you!” And I instantly felt bad for yelling at him, but felt justified at the time.

Thomas has a thing about hiking where he likes to climb into the trees and take a “short cut” and meet us back on the trail. Normally, I let him do this but today with the cliff and Stuart running at full speed I asked him not to. But of course he kept doing it, darting into any patches of brush he could find and my patience were getting pushed to the edge each time as Stuart would disappear behind him. So I ended up having to carry Stuart through those parts too.

Meanwhile, Kaiya was starting to feel the pain in her feet. I knew I’d have to carry her through parts of the hike to give her feet a break but at the time, I thought Stuart was going to be mostly running, not fighting me to put him down. So on we went, a combination of Thomas darting, Kaiya whining, and Stuart screaming to be put down. Chase was being his usual maintenance self. We took a break here: 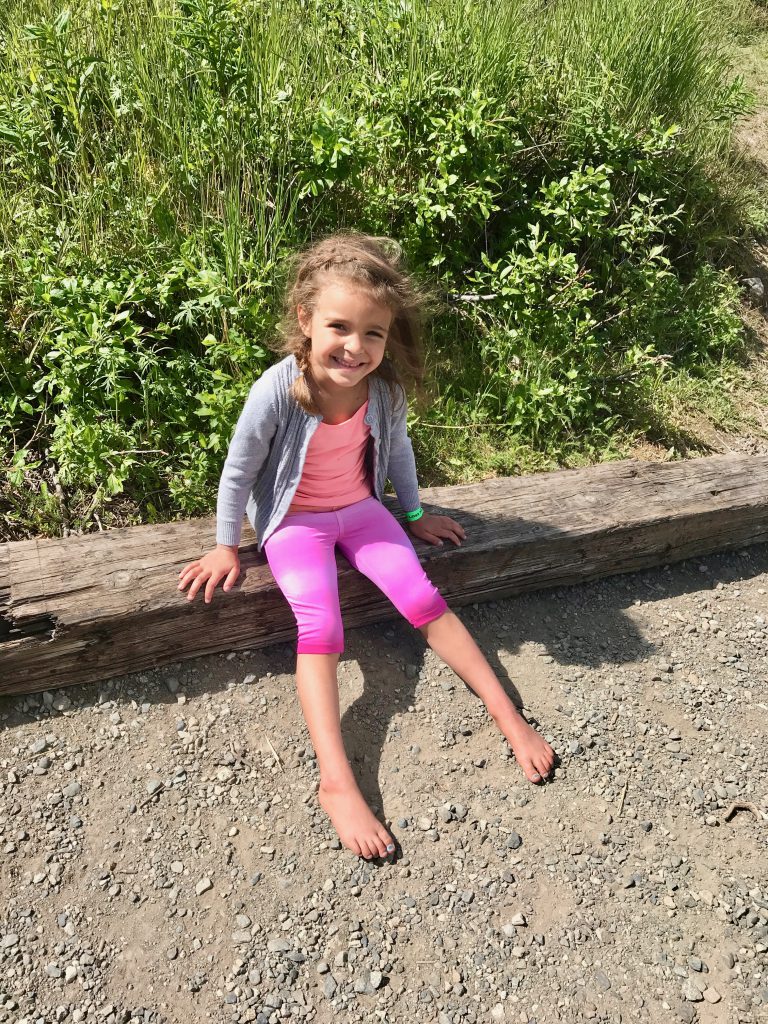 About two thirds of the way there Kaiya just decided she was done, and I ended up carrying her and Stuart at the same time. Her on the back, Stuart on the front, with no carrier but my arms. It was exhausting and I was not in the best mood. Feeling a little “why-me.” Having plenty of time to ponder why me, on an incredibly snow peaceful mountain top.

Mistakes I made: Not turning around and going home when Kaiya didn’t have shoes. Not turning around and just playing at our picnic spot when I realized I was going to be in a stressed out cliff frenzy the whole time. Yelling at Thomas for throwing rocks when it was the first time I had asked him since I’m not 100% sure if he heard me tell the other kids, but still he’s seven… And not bringing my Ergo, it would have been more than nice to put one of the kids on the back and have two arms free. Is it weird that I still don’t regret going? This is what’s tough about me with having four little kids. I still prefer to get out and do something with this many obstacles than hang out at home.

Trail Review: Blueberry Loop
Start at the Glen Alps Trailhead (parking pass or $5 fee required) and follow the main path. This initial part is very steep. After that, Blueberry Loop starts at the base of the small mountain in front of Flat Top. You’ll see benches and a sign and that’s how you know you’re there. It is nice because the views are amazing without a lot of strenuous activity. I also like it because it’s pretty short, and my littles have no problem completing it. If you go in late July and or August there are typically blueberries and crowberries. My kids love to “hunt” for them as we hike and they enjoy them so much you might think they had found treasure. The whole incline isn’t bad on the loop itself. It is a very busy trail, so I don’t worry about wildlife attacks. In fact sometimes there are so many tourists we have to stop to let them by. It seems like mostly the tourists don’t go on the north side though so that part is typically pretty quiet. The major downside as illustrated in most of my post above is there is a cliff to watch out for if you have little ones.