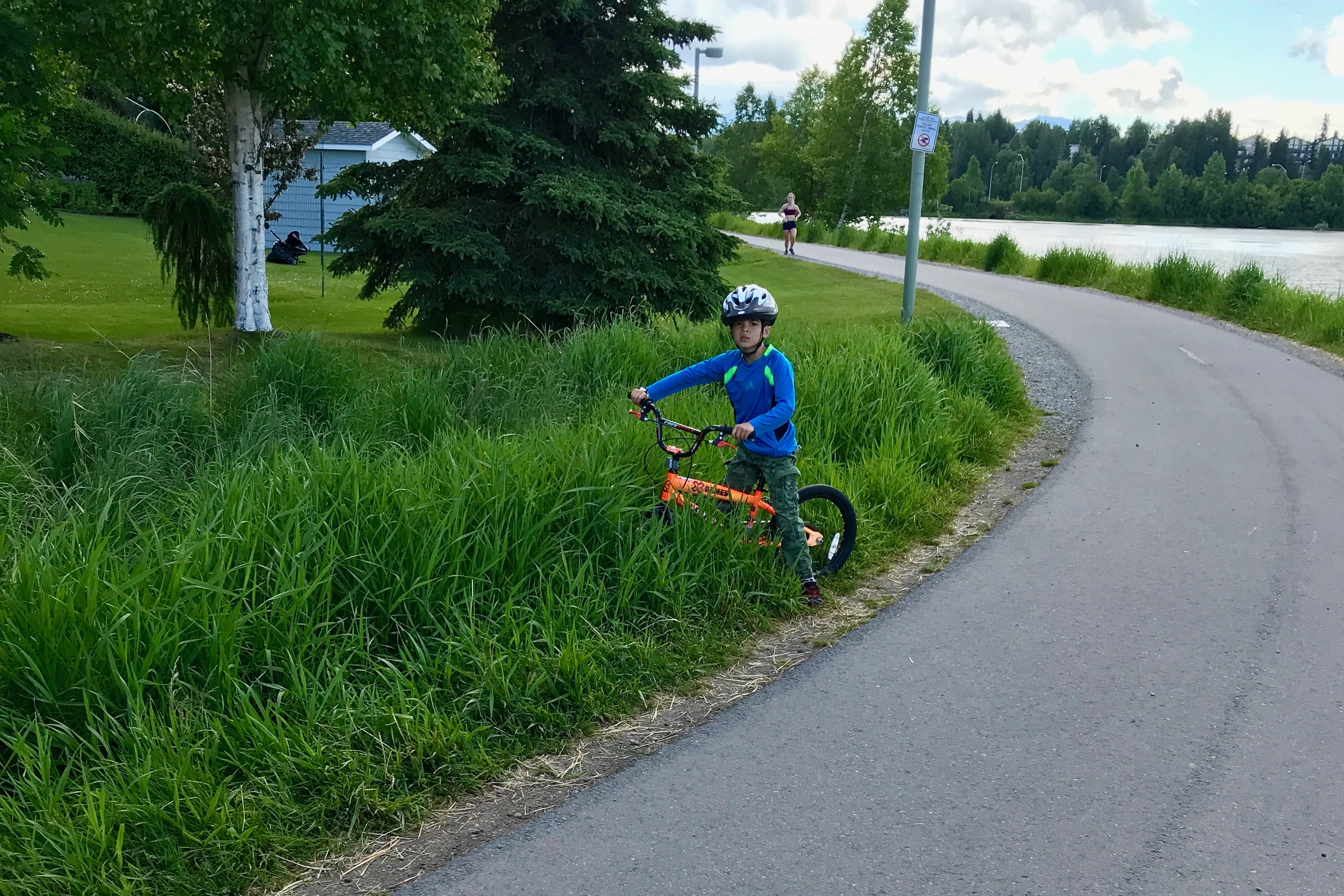 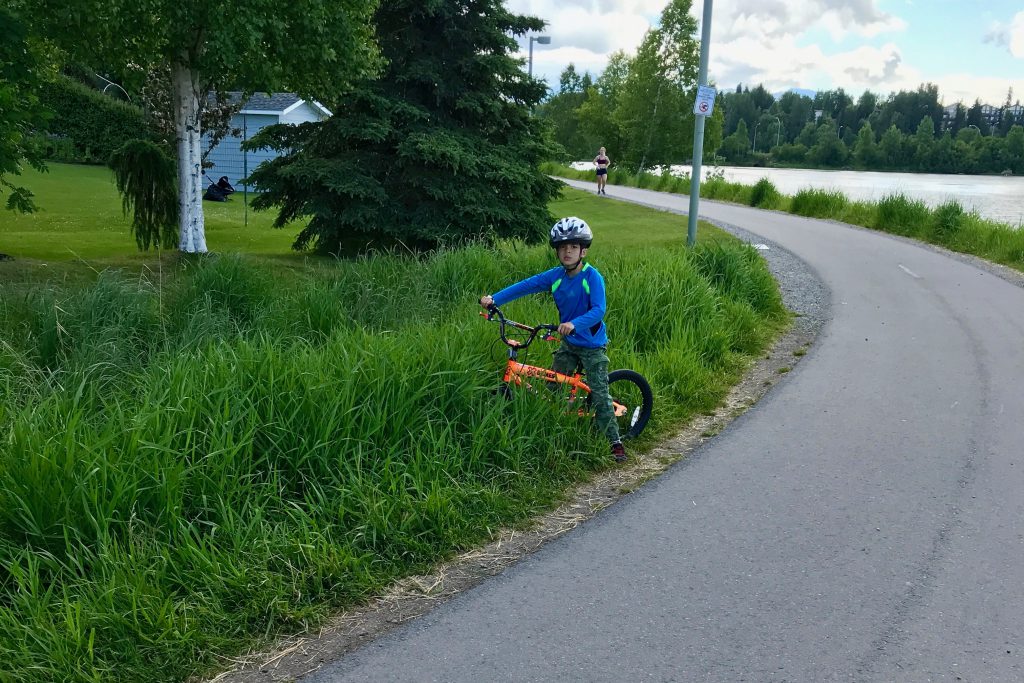 We started at Valley of the Moon Park, took the trails to Westchester Lagoon, and back. I have to set the scene: The plan was to bike from one park to the other and back (about a mile each way.) We went with about five of my friends and their children. Before we left, I told my husband, “I am really apprehensive about this. Thomas really hates riding his bike, and worst case scenario is we are going to try, Thomas will wreck, and then get so upset he can’t function, and I will be stranded between the two parks with an injured crying child and no way motivate him get back on his bike and try again. Or, best case scenario he will finally figure it out and actually enjoy bike riding.”

When it comes to bike riding Thomas never wanted to try with or without training wheels. He is generally pretty uncoordinated and that makes bike riding tough. As I pushed him to try with training wheels he never found it fun. When we took the training wheels off and he started falling over he felt like we were torturing him. This summer as we started working with him again in our driveway he would get upset when I told him we were going to go work on bike riding. We had one day where he was making progress, balanced, gliding down the driveway running into the grass which would slowly and gracefully stop his speed. Unfortunately after a couple of successful runs he started accidentally driving straight into the house, a meltdown about how mean I was always ensued.

So I knew getting him to ride a two mile bike ride was going to be hard. Plus I have my three other littles. Kaiya and Chase enjoy bike riding so I wasn’t too worried about them. Other than that I knew they weren’t going to want to slow down and wait around if Thomas threw a tantrum. Once all of the moms and kids got ready we all got on the bike path and told the kids “go”. There were about fifteen little kids riding bikes, balance bikes, scooters, and some in strollers. As everyone took off Thomas’ apprehension set in, and he started hesitating and telling me he couldn’t do it. The parade of children (including Kaiya and Chase) vanished out of sight as I tried to get him going both physically and mentally.  As I would grab the handlebar and seat of his bike and begin to job before letting him go he would just start a yelling mantra of “I can’t do this! I can’t do this!” He would instacry and shake his handlebars uncontrollably and thus fall straight down.

Eventually (about five minutes in) I got so frustrated I yelled at him to go put his bike back in the car because I couldn’t do this. Kaiya and Chase were way ahead, with the group I hoped, and Stuart wouldn’t stay in his stroller. He kept crawling out and running towards the stream next to the bike path. I was so surprised when he yelled back, that he wanted to do it and he wasn’t going to put his bike back. For the first time, seeing desire in him I was thrilled but skeptical. So we agreed he would stop the negative self talk and his only mantra would be “I can do this! I can do this!” Otherwise he could take his bike straight back to the car.

As cheesy as it sounds it worked. He started trying and saying his mantra. After five more minutes of him giving honest effort one of my friends from the group ran back and took Stuart and the stroller so I could keep working with Thomas without having to double back and get Stuart. On the way to the park, his balance spans started to get longer. He started to gain some control with steering. On the way back he was a fully functioning bike rider even starting by himself! When we got back to the park where our car was, he enthusiastically asked if we could do it again. I am so happy for him.

Teaching him to ride a bike has been an abnormally long journey and one I considered giving up on many times. I truly wasn’t sure if he would catch on someday, and this summer I was prepared for the possibility that it would still be several years into the future before he would. Looking back, trying to push him to do this on a big group bike ride was a bad choice. I was more easily stressed out knowing that two of my middles just left us in the dust and hoping the other moms didn’t mind having two extra, and trying to catch the fleeing baby in the stroller, and doubling back. When you have four littles though, sometimes there just isn’t a good time.

I am so grateful for my mom friends who always help in times of turmoil. I really truly can’t thank them enough because I am sure they don’t understand how much their little bit of help produced such a big moment for Thomas. No more watching his friends bike, no more dread at the thought of getting on it. We might even be able to do a family bike ride this summer. This is life-changing!